modernized GEFILTE FISH (...not from a glass jar...)

‎דגים ממולאים,  dagim memula'im... Gefilte fish, gefilte fish, gefilte fish... I get conflicting feedback about this dish. So many absolutely LOVE the canned variety (to my dismay!) and many really HATE it (I can totally relate). 99% of Jews I've met look forward to consuming it once a year at a Passover Seder.
I did not grow up eating Gefilte Fish (and I CERTAINLY didn't have ANYTHING resembling it coming out of a glass jar!). When it was time for me to throw my first seder about 10 years ago, I was told that Gefilte Fish was a MUST-SERVE and was advised (and expected) to simply buy the canned gefilte fish and serve them on individual plates fancied up with something pretty, like a piece of orange carrot and a lettuce leaf. Garnish was critical since gefilte fish is... well, ugly and colorless (eek).
My time in grocery stores spent staring at the egg-shaped specimens in the glass jars available by Manischewitz did not help (um, disturbing!). It was a nervous mix of mental and visual... just couldn't eat it. I certainly couldn't SERVE something I couldn't eat. 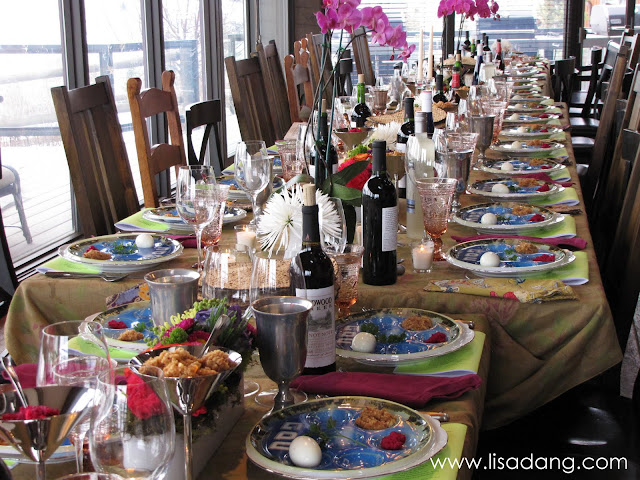 Aunt Gerry gave me my first Jewish cookbook, Joan Nathan's "The Jewish Holiday Kitchen." There was indeed a recipe for homemade Gefilte Fish. "It's SO much work to make," and, "What a pain!" people went on and on kept discouraging me.

Like most Asians, I grew up eating fishballs (like meatballs, but fishballs) in Vietnamese noodle soups and my mom bought frozen and fresh fishballs all the time, so minced fish shaped into balls was not completely foreign to me... but fishballs stored at room temperature in glass jars with hardly an expiration date?! Hmm, suspicious!
At the very beginning, ten years ago, I actually followed Joan Nathan's recipes diligently, meticulously... locating the carp, whitefish, pike and boiling fishbones, laboring for hours, etc. As the years went by, restless and rebellious, I keep doctoring up the recipes a bit with minor alterations, just to make life easier. What started out as a laborous hassle, is today a relatively EASY and yummy dish I look forward to making each year!
Make the gefilte fish the night before the seder. Store the fish balls in a tightly sealed container covered in the cooking liquid and keep in the fridge up until serving. What a odd and challenging shape to plate. Matt had the brilliant suggestion of cutting them into halves and stacking. Plate it next to a spoonful of beet horseradish and greens with an orange-dijon dressing mix. Funky vibrant fuschia horseradish and some greens JUST POP gorgeously against a clean white plate. 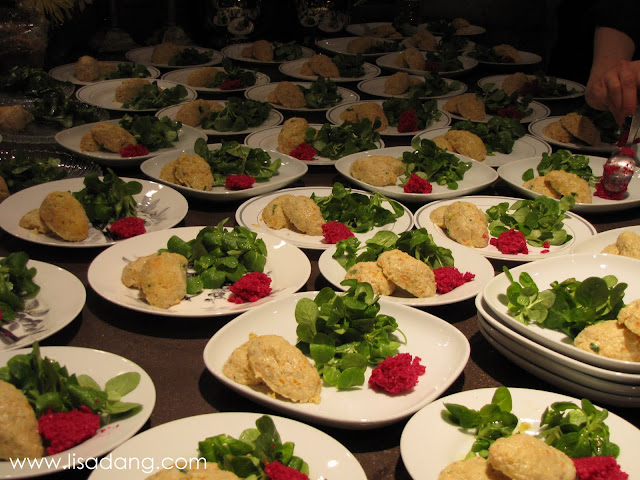 **MODERNIZED GEFILTE FISH**
(food processor, giant mixing bowl, big pot of water)
2# salmon, cut into 2" pieces
4# tilapia, cut into 2" pieces
2# dover sole fillets, cut into 2" pieces
2 onion
15 garlic cloves
3 carrots
1 bunch scallion
12 eggs
1 cup matzoh meal
2T salt
2 tsp pepper
2T fish sauce
3T sugar
(1) In a food processor, chop the garlic and onion. Transfer to mixing bowl.
(2) In the food processor, chop the carrot. Transfer to the garlic and onion mix.
(3) Grind the fish in small batches to a ground beef consistency and transfer to the carrot-garlic-onion mix. Repeat until all the fish has been ground and added to the mix.
(4) Add 12 eggs. Mix well. Use gloves to make it easier!
(5) Add salt, pepper, sugar and matzah meal to the mixture. Mix well with gloved hands or spatula.
(6) Bring a big pot of water to a boil and add salt and pepper. When it boils, turn the heat down to simmer.
(7) Scoop out 1/4 cup of fish mixture at time and shape into round egg.
(8) Drop into pot of water. Do this until the fish mixture is gone or until the pot is full. Close the lid and let cook for 15 minutes. If all the fish mixture does not fit, repeat this step. 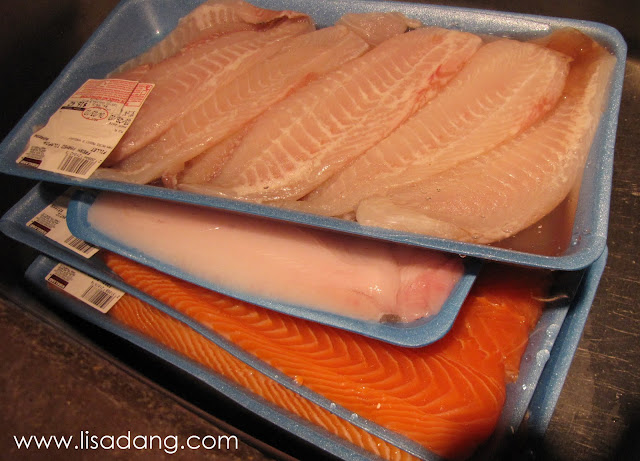 (1) In a food processor, combine the garlic and onion and grind until minced. Transfer to the giant mixing bowl. I use nonlatex gloves (surgical type) to keep my hands from smelling BAD and to keep food from getting under my fingernails (ew!) and to keep my manicured nails looking fresh (of course!). 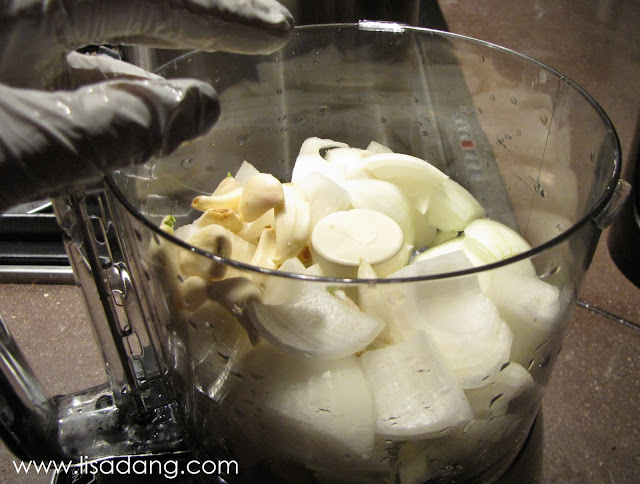 (2) Next, chop up the carrots in a course mixture and add to the garlic-onion mix. 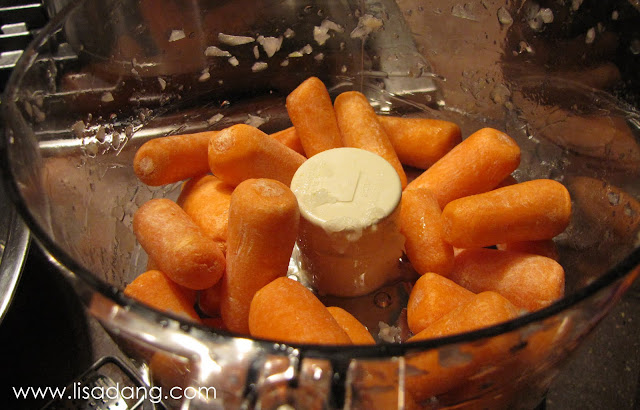 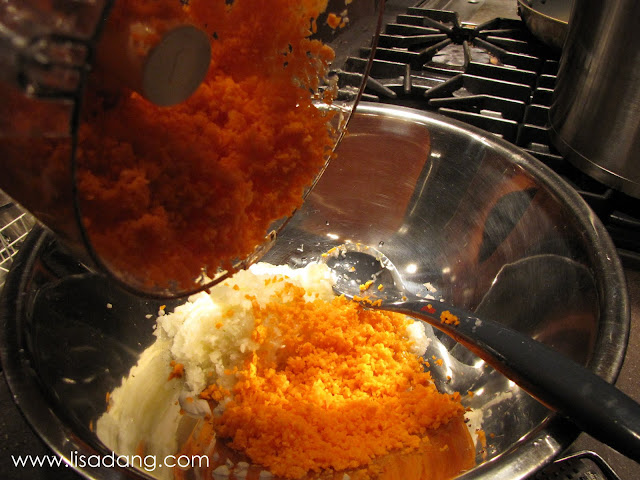 (3) Then grind the fish in small batches at a time, adding the minced fish to the garlic-onion-carrot mix. Repeat this step until all the fish is minced. 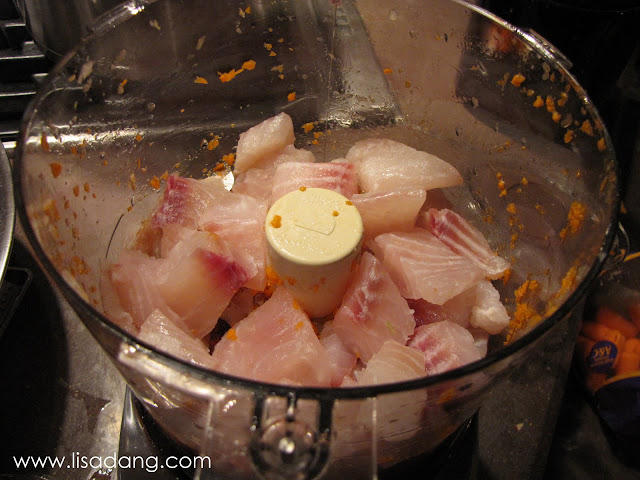 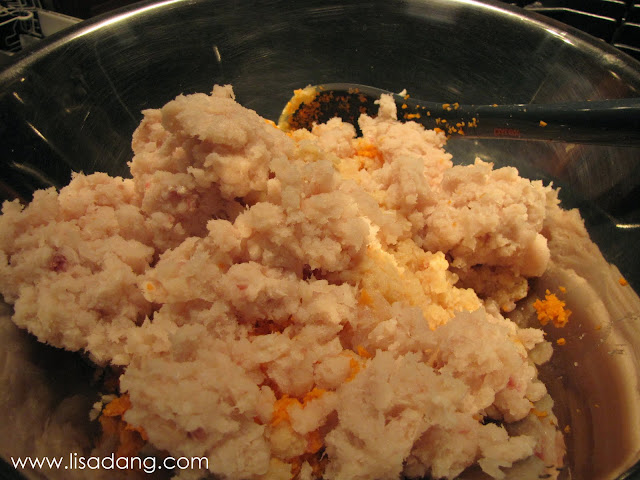 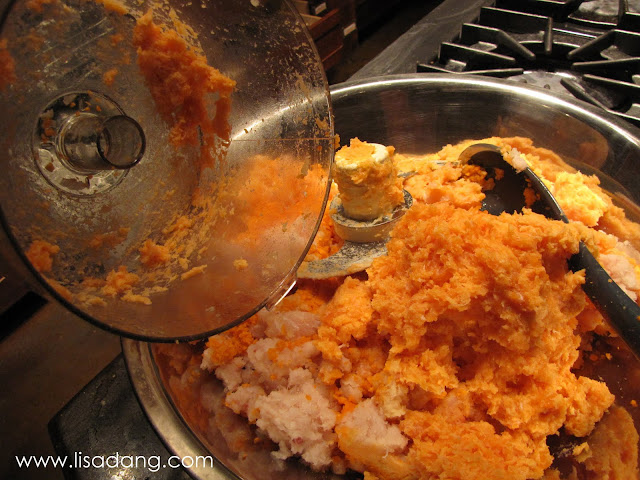 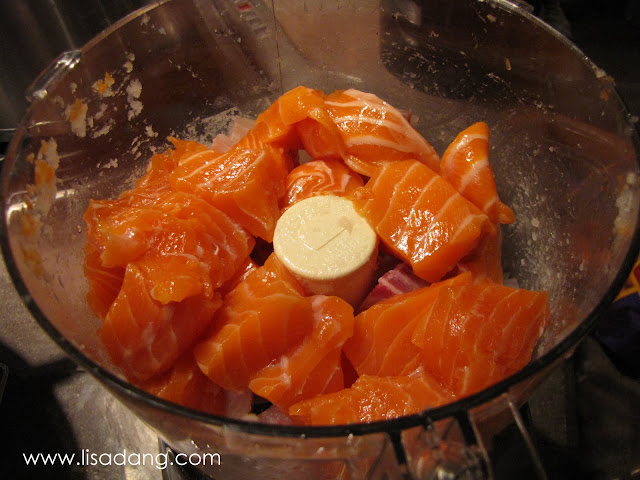 (4) Next add the eggs. Crack them in a separate bowl first to ensure no eggshells slip in. 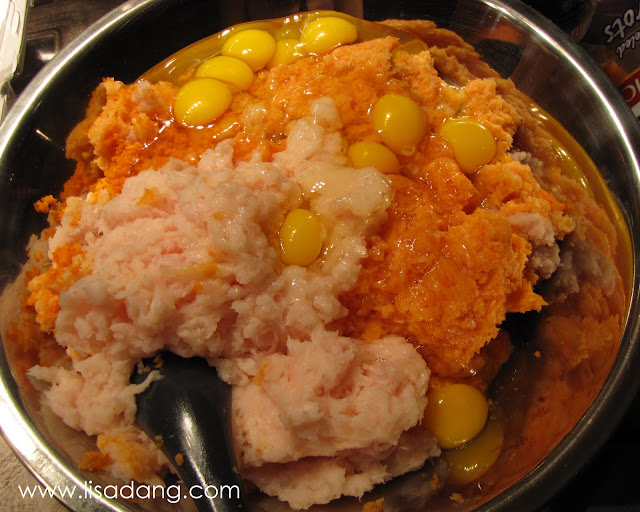 (5) Add the matzah meal, salt, pepper, sugar, fish sauce. Mix well. I find it so efficient to use nonlatex gloves. Gloves for everything! 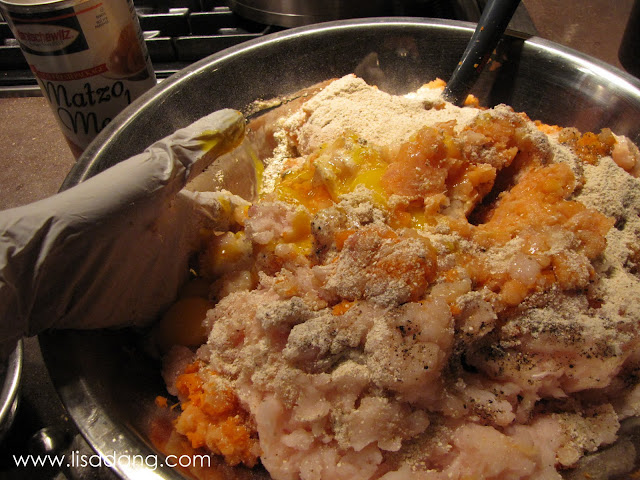 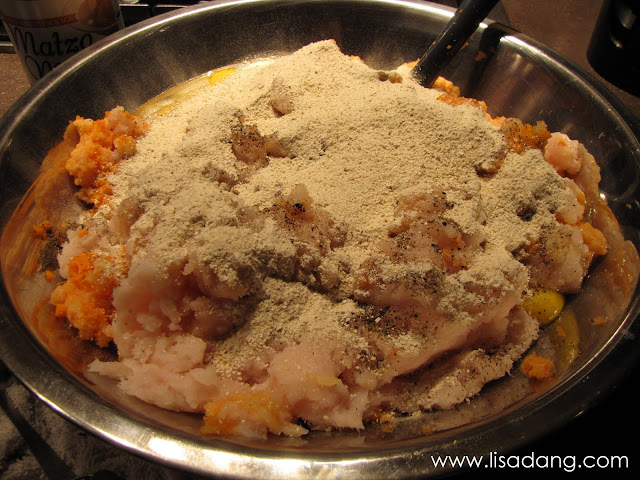 (6) Bring a pot of water to a boil then simmer, adding a generous amount of salt and pepper. Using a 1/4 cup measuring spoon, scoop out a chunk of the fish mix and, with your wet hands, form oval-shaped balls and drop them into the simmering pot of water. 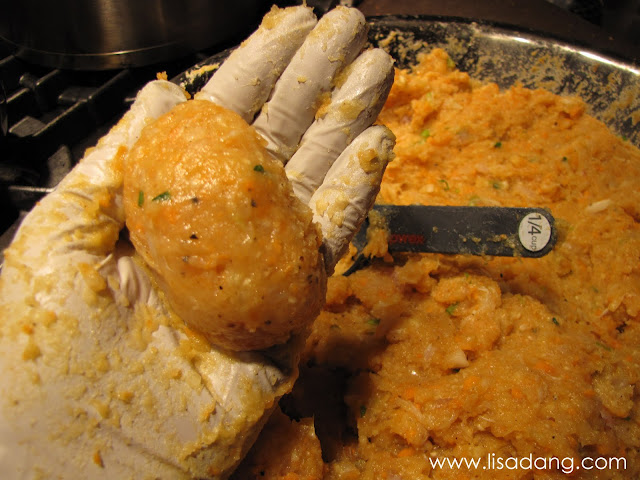 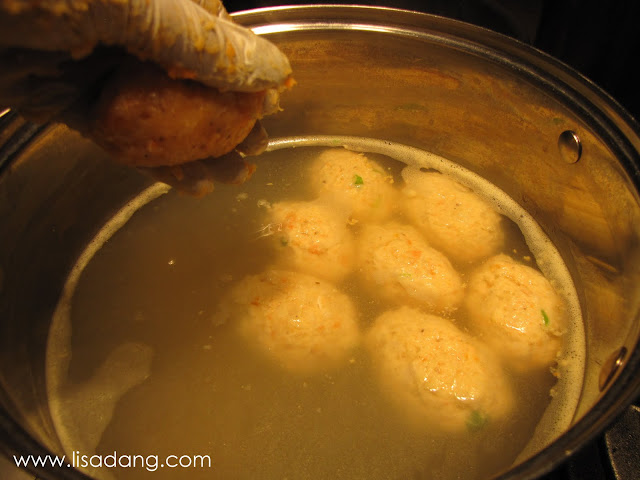 (7) Let simmer until cooked through, about 15-20 minutes. When they are done, store in a container the fishballs in the fishstock, sealed tight, in the fridge until serving. This could be made 3 days in advance. 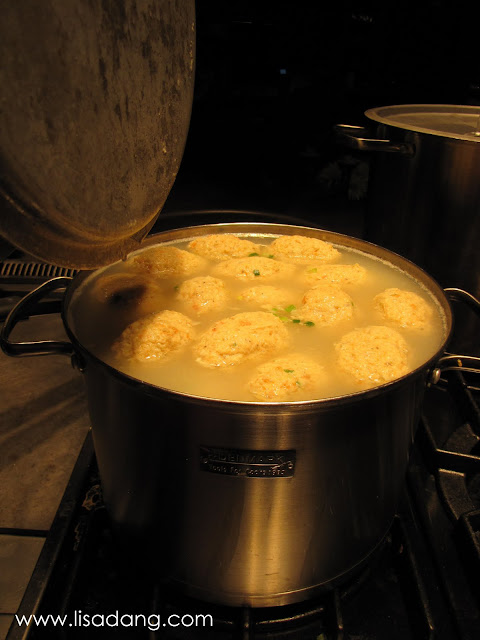 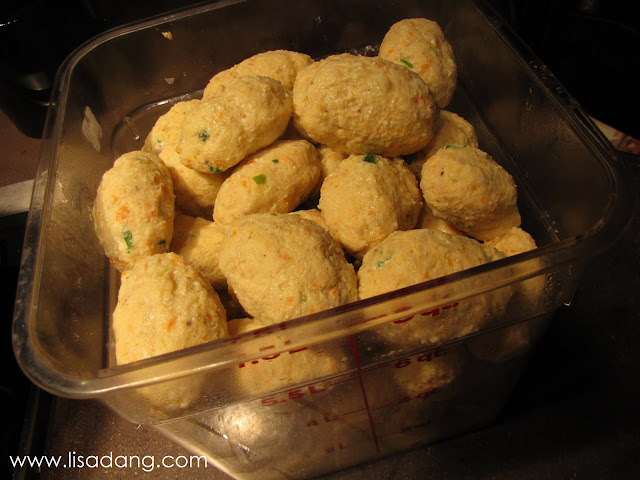 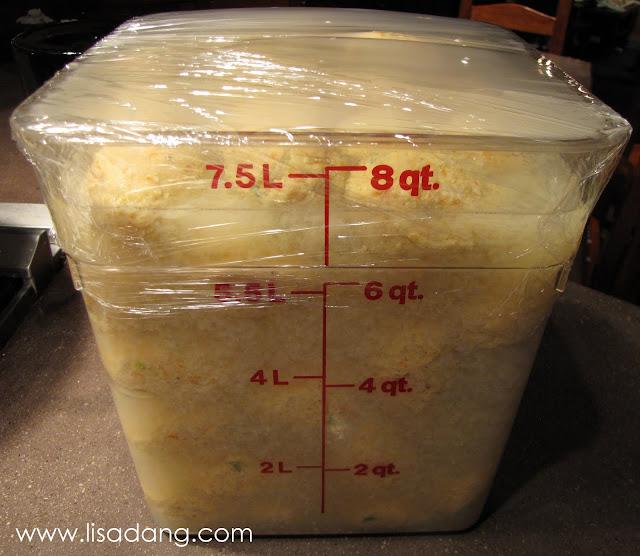 On the night of the seder, bring it out. Time to plate it! Cut the egg-shaped gefilte fish in half and stack them half way on one side of the dish. Next to it add some greens tossed in a dressing (orange juice, dijon, olive oil, salt, pepper, sugar) and a spoon of beet horseradish. STUNNING! 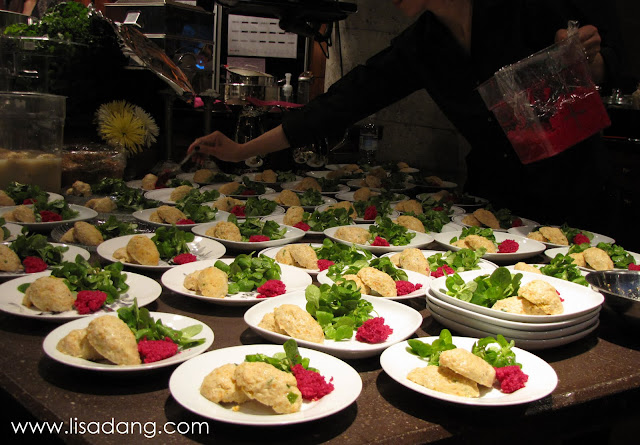 Posted by LisaDang at 1:20 AM
Email ThisBlogThis!Share to TwitterShare to FacebookShare to Pinterest