Macao Chinese Restaurant is one of eight signature restaurants located in the The Legendale Hotel Beijing, one of the luxurious 5-star hotels in the financial district of Beijing, which was also recognized as one of the only two VIP hotels during the Beijing Olympics. (Yes, this is an over-due repost...it got lost and now found in the transition.) 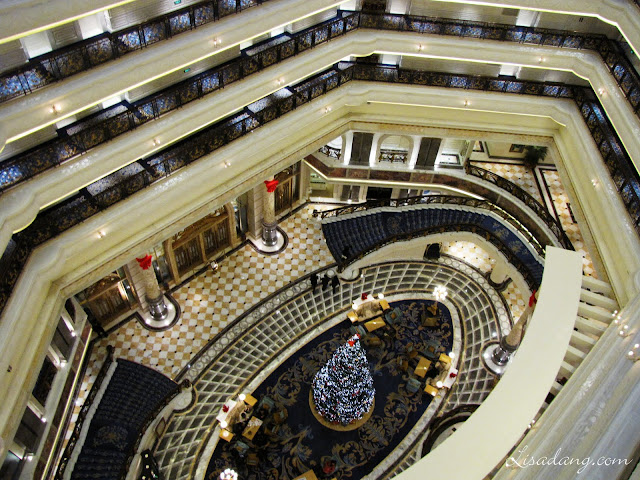 It was a little over-the-top, neo-classical.... 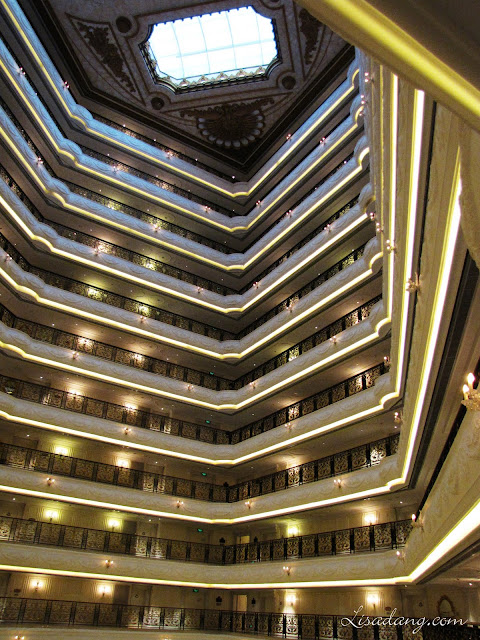 The night before, I was given the Macao menu asked to order the next night's dinner. Honored but unprepared for handling a high-end Beijing dinner menu), I declined, returned the menu, and told them to find someone else. 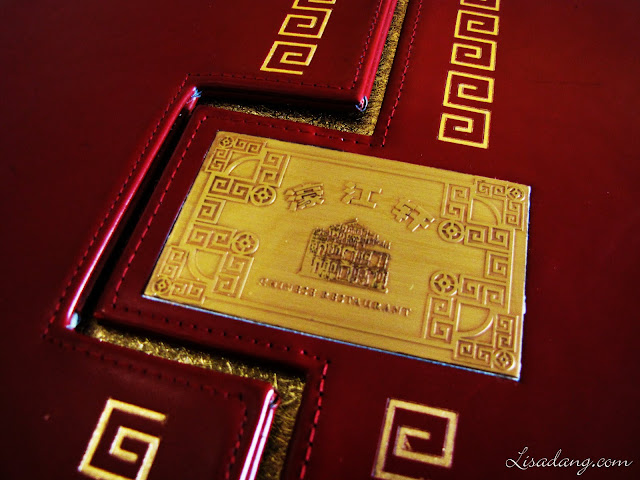 Our host gave us a tour of the numerous private dining rooms, each with its own theme. When we reached our designated room, I was blown away. It was an excessively draped round room, large enough to fit just one oversized banquet table and a small sofa. Decor was artistic, funky, masculine, whimsical, with dark velvet curtain drape walls and deep red textiles. The high dome cathedral ceiling and over-sized mirrors with thick gold frames were strategically positioned to produce a circus-like, Houdini effect. The servers came and went by disappearing through hidden doorways behind the drapery walls. Very cool. 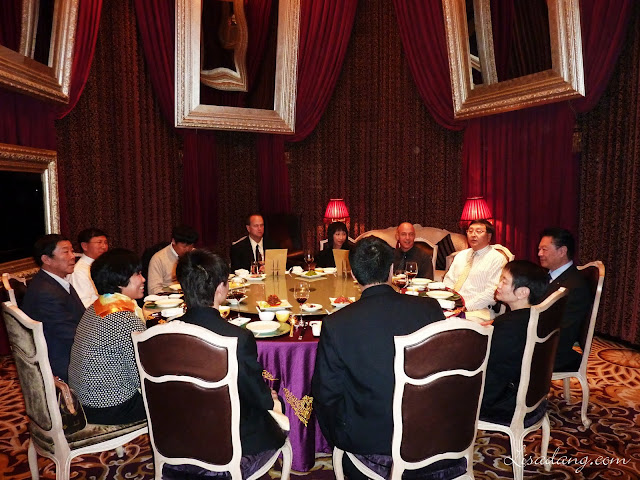 As soon as we sat down, servers quickly filled the lazy susan perimeter with traditional appetizers and cold cuts. The pre-ordered menu was printed out and put into multiple frames on the lazy susan. 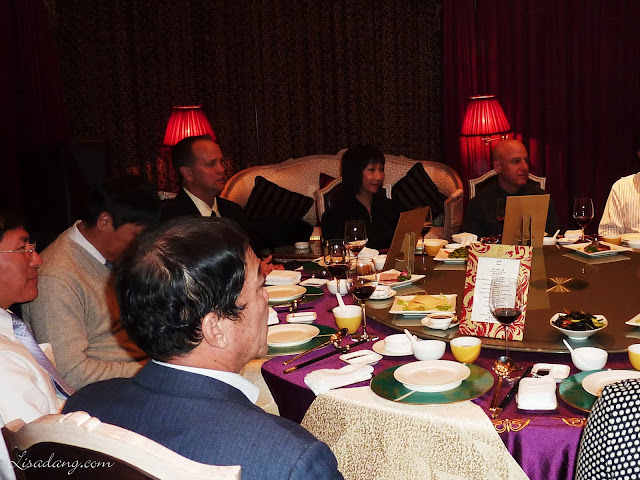 The dome ceiling was amazing. Wow. 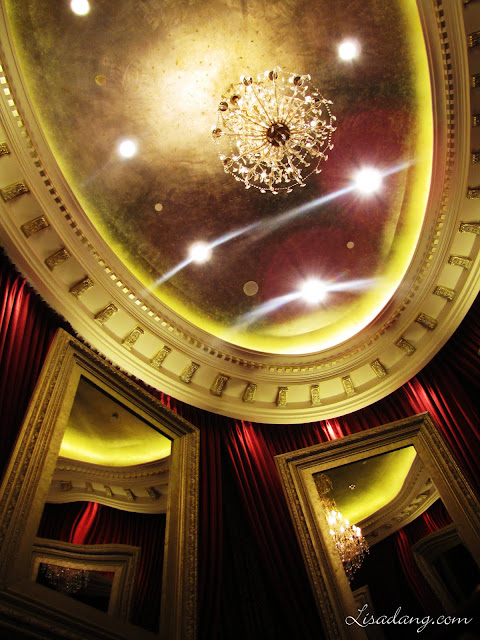 When it seemed like we all understood the menu, the servers took them away and replaced the spaces with more appetizers. There were too many and the lazy susan kept spinning for me to get pictures. Gorgeous place settings. I particularly loved the spoon and chopstick holdres. 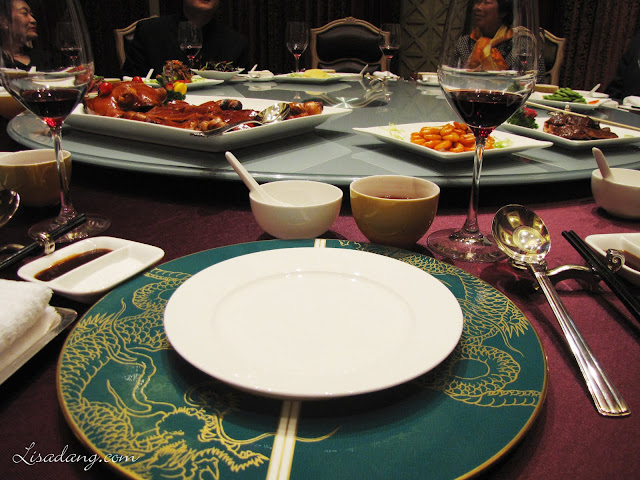 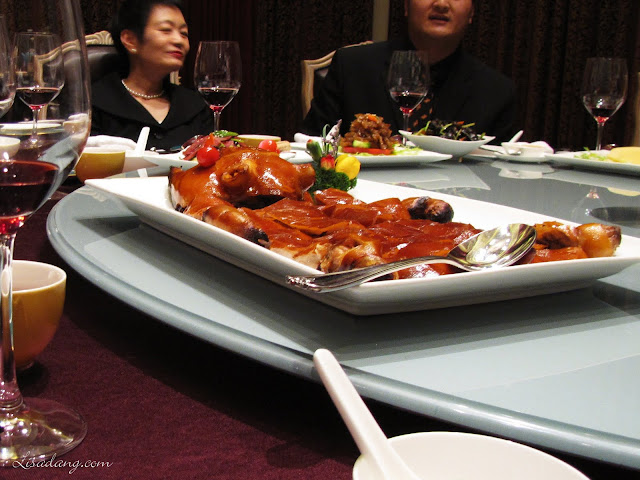 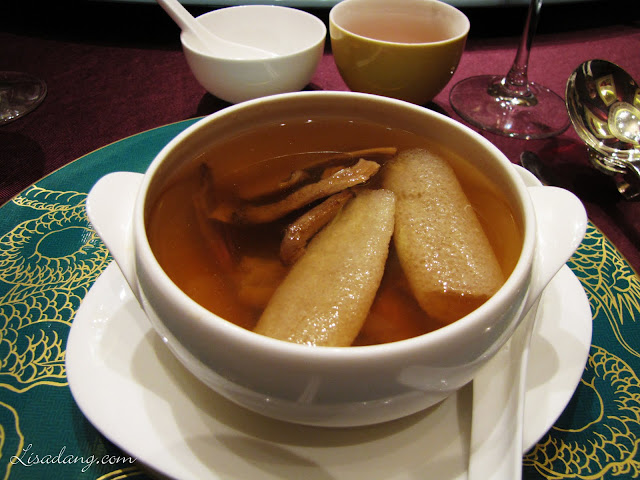 LOBSTER.  I didn't get to take a picture of the full lobster platter. The server came out a huge beautiful platter with giant lobsters artistically mounted and put it on the lazy susan and spun it around once. Then she just took it away through the walls. Too quick, missed the photo op. Almost immediately, servers came out with individually plated generous portions of lobster meat. Big, meaty, done perfectly, fantastic flavors. 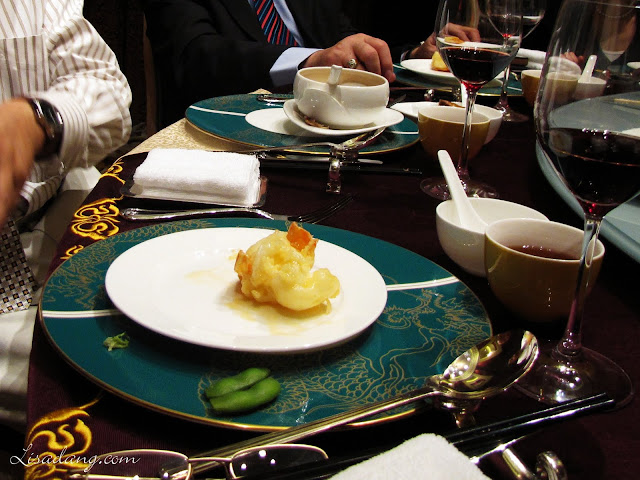 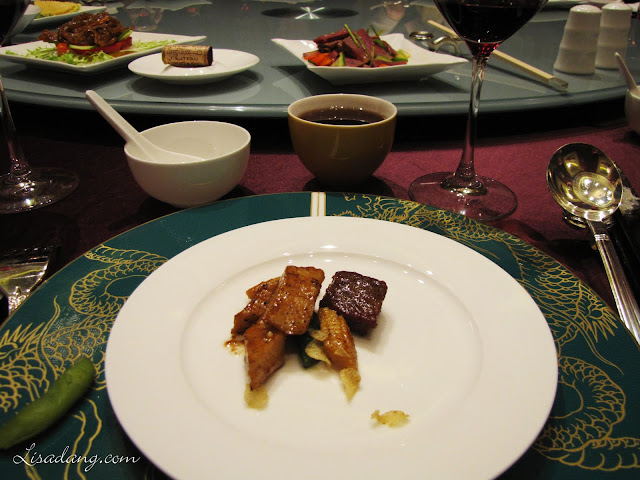 We had many beverages in front of us the entire time but no water. Premium red wine, clear fire wine (toxic, barely drinkable!) and tea. It was like musical chairs with person-to-person toastings and people getting out of their seats and walking up to someone else, squatting or genuflecting and toasting. Lots of sequential translation going the entire time, a surreal bilingual echo. 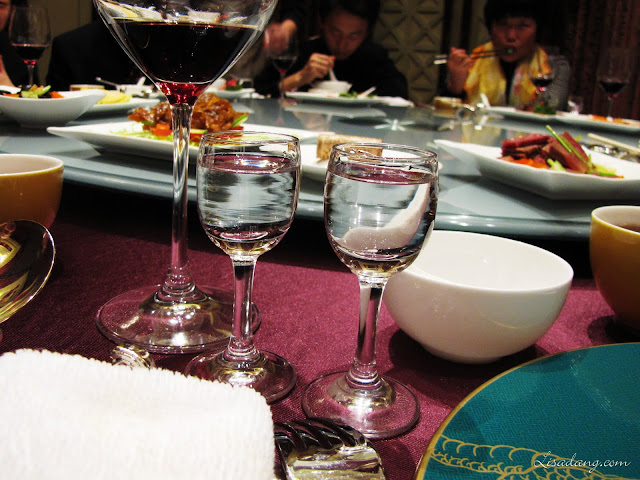 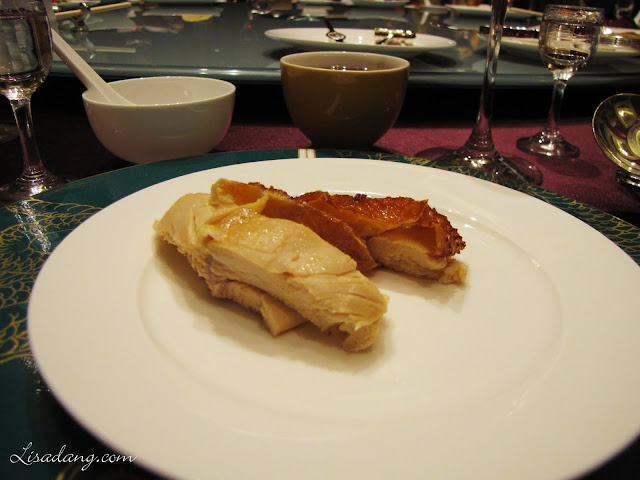 STEAMED FISH IN GINGER SOY.  Like the lobster scene all over again, the server flashed a gorgeous display platter of the whole fish for all to see onto the lazy susan, quick spin, then disappeared through the walls with it. Then someone came out and left a plate of just the head and the tail. 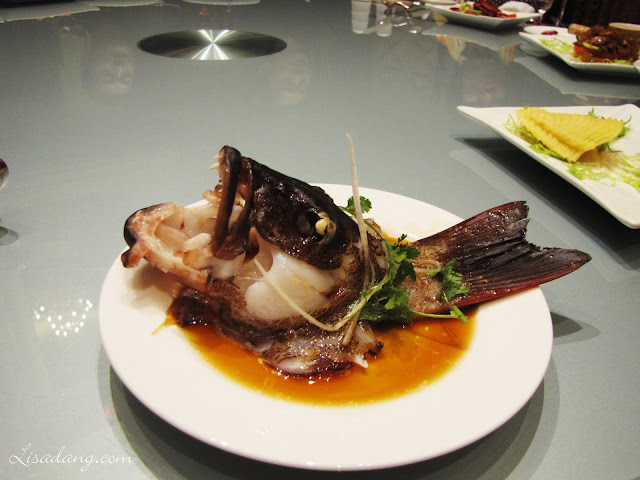 Immediately, we were each given a large portion of steamed fish in ginger and soy. So delicate and flavorful. 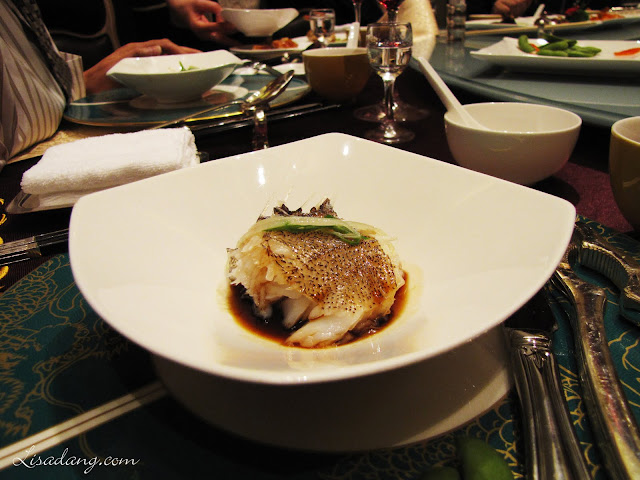 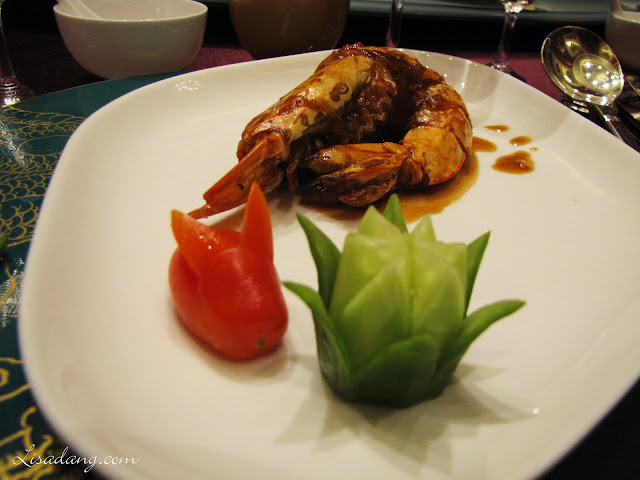 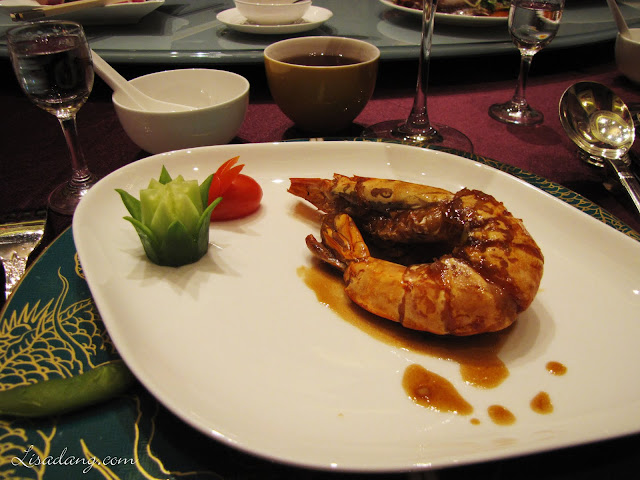 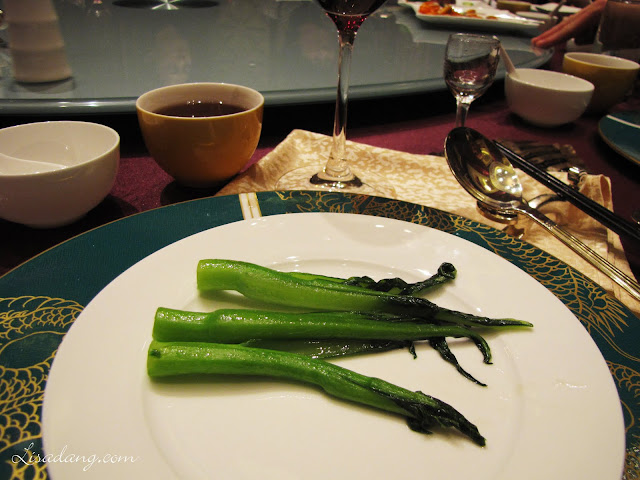 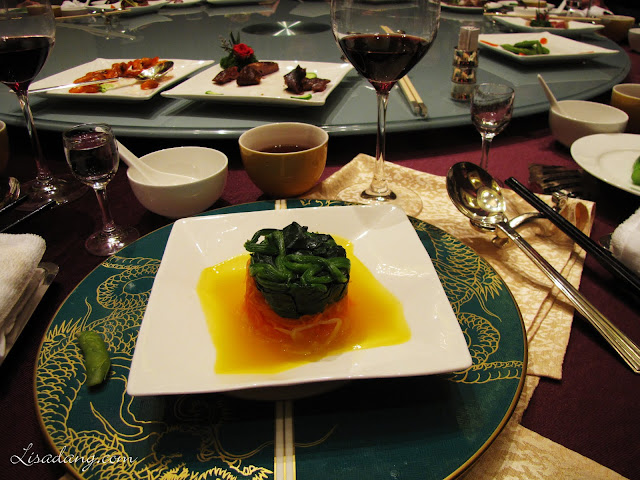 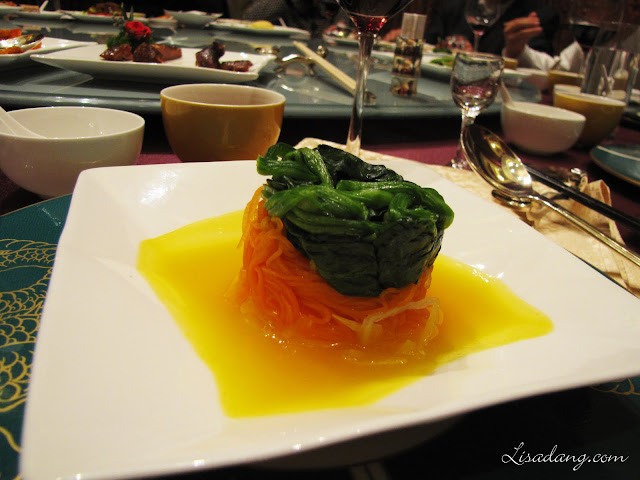 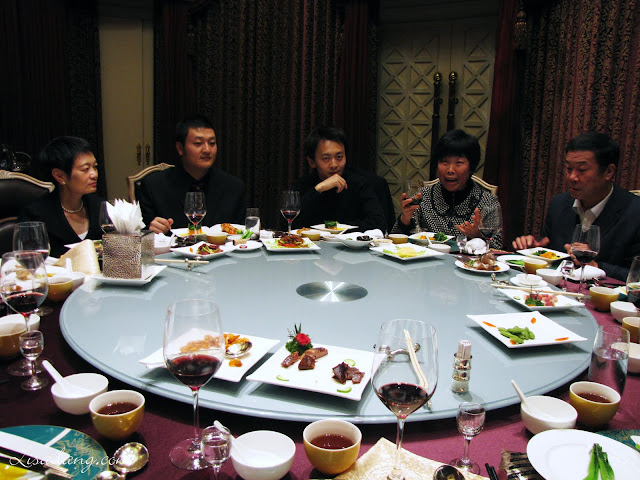 Fried Rice.  Finally some rice. We were told that since we were honored guests, we certainly would not be given carby rice earlier to fill up on. 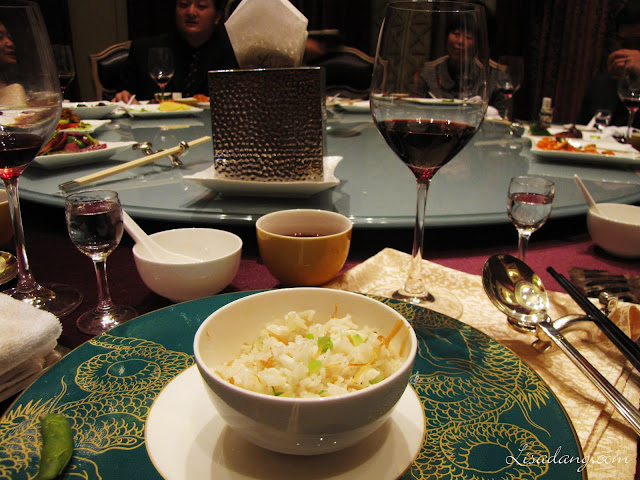 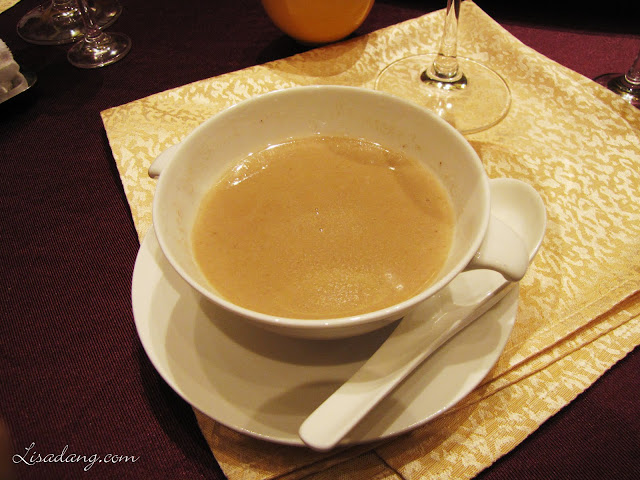 There was way too much food and the servers kept replenishing empty dishes with more interesting sides. So beautiful and artistic and delicious. This was one of the tamest dinners yet most elegant meals we had in Beijing. I assume the person ordering was considering the number of American palates at the table ;)


Posted by LisaDang at 1:08 AM
Email ThisBlogThis!Share to TwitterShare to FacebookShare to Pinterest